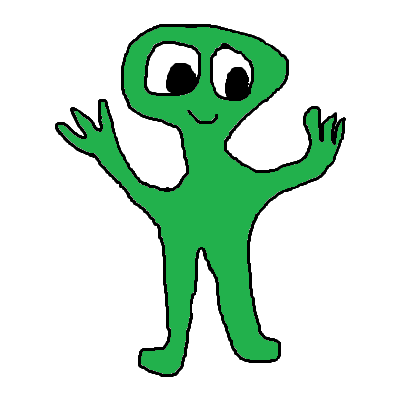 Greetings!  You may have noticed a small green alien in various places around this site and as my profile photo in several places.  Who is this green alien?  His name is Heinz Werner! 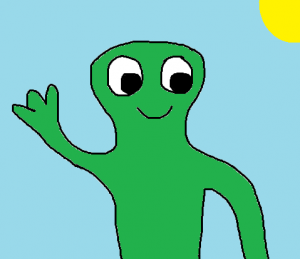 Heinz is a very friendly alien.  He gets his name from Heinz Werner, the developmental psychologist.  He is most well known for his theories on “microgenesis”, where children’s thinking evolves from primitive to abstract thought during their development.  Children have to learn to classify objects in their world, starting from the basics of  identifying icons (a tree, a car) while distinguishing the boundaries between reality and fantasy (can a tree really be happy?).  During my first semester at Pepperdine, I worked on a jigsaw project with a few classmates where we had the task of teaching our peers about this interesting person.  Rather than present a dry Power Point, we instead performed a puppet show with visuals and dialogue to help explain these concepts. 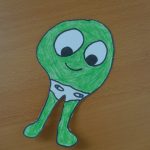 Heinz has a wife and a representation of him as a baby as well (his species grows arms as they mature).  The original presentation included an alligator-esque narrator who now lives with my co-presenter.  Heinz’s species appeared in several other of my assignments in my master’s program, which led to his eventual development as a key component of my style as a teacher. 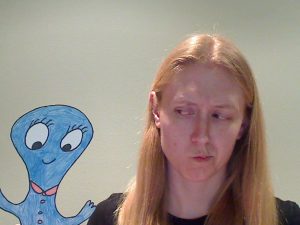 Heinz’s entire family is quite special because they are incredibly easy to create.  The challenge is to draw Heinz without lifting your pencil off of the table.  This takes some practice to make sure his head is closed but is a very good spacial awareness practice for students.  What began as silly doodling has become a useful and recognizable part of my teaching. 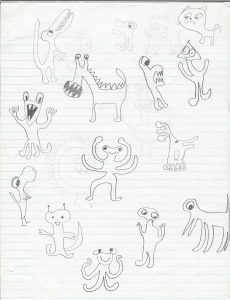 The Heinz below was created with Microsoft Paint and a computer mouse.  I’m sure he could be more refined if I used a stylus on an artist’s tablet, but his simplicity is also part of his charm.

How does this green alien help my teaching?  Heinz is visible all over my classroom. 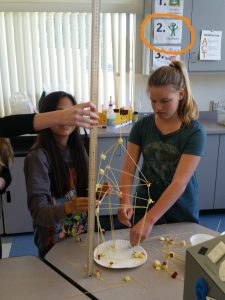 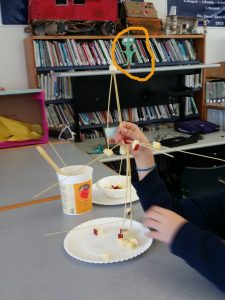 I have the original paper version of Heinz in the room and move him every week so that the elementary students have to find him in the room.  Heinz also is the generic student that I use for examples because I haven’t yet had a student named Heinz.  He has appeared in numerous word problems and the students enjoy having someone in mind when solving something abstract.  The fact that he is an alien is very useful when I want the students to practice explaining a concept.  One of my test questions in 6th grade is essentially “Explain to Heinz how he can find an answer on the internet”, where my goal is for students to be very specific and list tips they have learned for conducting a Google search.  Heinz was also a great model for the green screen because only his eyes and his bowtie are visible unless he turns around.

He also serves as a muse for students when they need some creative inspiration.  Cousins of Heinz have appeared in many student projects and have been doodled on many student papers.  He was married in drama class last year and has been recreated as a puppet.  This past year he even was hired in his new job of ambulance driver. 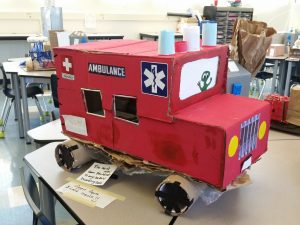 It’s fun to have a class mascot that is relatable and easily replicated by the students.  He adds a bit more whimsy to the class hopefully without being too obnoxious.  As of yet he has not appeared in any videos but he certainly could in the future.  I intend to keep Heinz around for a while though we shall see what adventures are yet to come.